Sleep Apnea: The Complete Guide for 2021 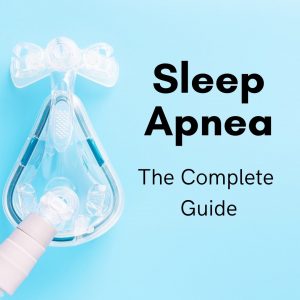 If you or someone you know wakes up in the night gasping for air or regularly experiences very loud snoring, it could be a sign of sleep apnea. If left untreated, sleep apnea can cause a series of health risks and, in some cases, can be fatal.

In this guide, we’re going to explore what sleep apnea is, what symptoms to look out for and how to treat the condition.

What is sleep apnea?

Sleep apnea is a sleep disorder that causes sufferers to stop breathing for short periods of time while sleeping. The most common form of sleep apnea arises when the airway becomes partially or fully blocked. During sleep apnea episodes, breathing generally stops for 10 seconds or more, causing sufferers to wake up briefly due to lack of oxygen. Depending on the severity of the condition, these episodes can occur repeatedly throughout the night.

The sleep disturbances experienced with sleep apnea mean sufferers spend less time in deep sleep, resulting in symptoms such as tiredness and lack of concentration during the day.

There are three types of sleep apnea:

Central sleep apnea affects around 0.9% of adults. Unlike obstructive sleep apnea, with central sleep apnea, there is no physical airway blockage. Instead, symptoms occur when the brain fails to send signals to the muscles that control breathing. CSA is often a sign of an underlying health condition, and snoring is less common with this type of sleep apnea.

Mixed sleep apnea is when patients experience a combination of both OSA and CSA. 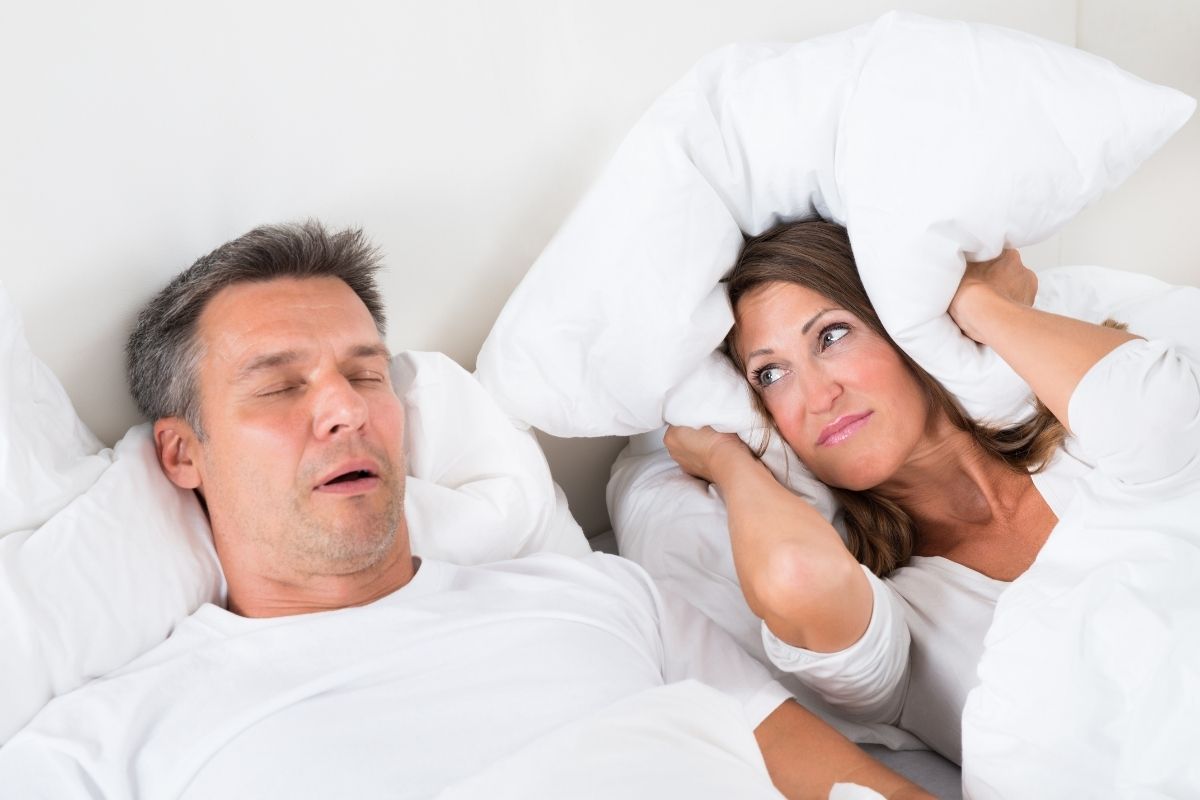 While some people with sleep apnea remember waking up briefly (usually with a gasp), others are unaware of their breathing difficulties. Because of this, it’s a condition that often goes undiagnosed. In fact, it’s thought that around 23.5 million people in the US with obstructive sleep apnea remain undiagnosed.

At night, or when sleeping, the symptoms of sleep apnea include:

If you’re someone who experiences any of the above symptoms but sleeps alone, it may be worth recording yourself while sleeping or asking a friend or family member to monitor you as you sleep. You may also wish to carry out a sleep apnea self-test. 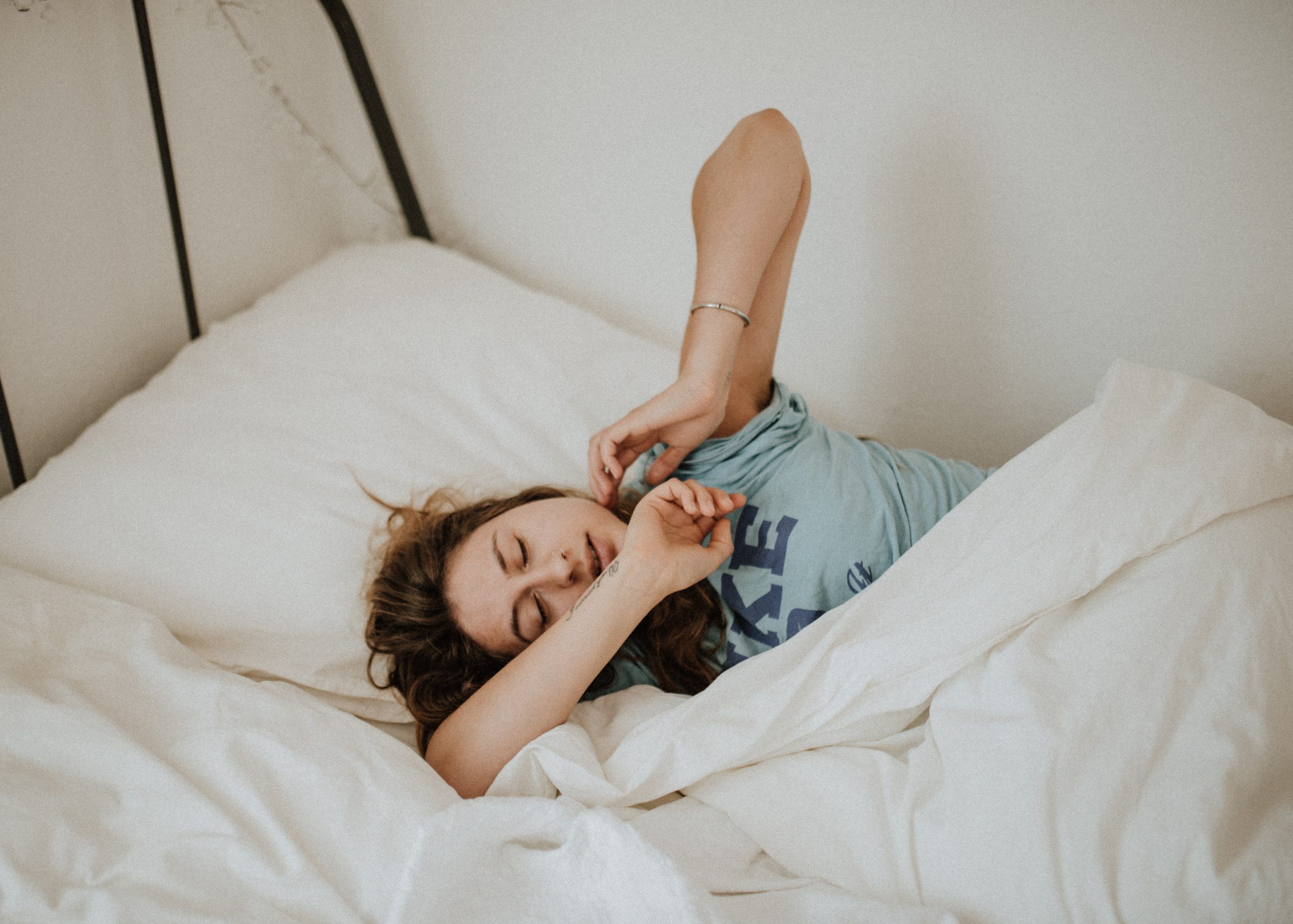 There are various factors that can cause sleep apnea, most of which are linked to obstructive sleep apnea (OSA).

Those who are overweight and obese are at higher risk of sleep apnea, with over 50% of sleep apnea sufferers having a body mass index higher than 30 kg/m2.

As well as weight, neck circumference is also a risk factor for obstructive sleep apnea. A neck size larger than 17 inches in men and 16 inches in women usually indicates excess fat in the area.

Sleep apnea is common in those who sleep on their back. This sleeping position can cause the tongue and soft tissues in the throat to relax towards the back of the throat, partially blocking the airway.

Sleep apnea is more common in men than in women, with approximately 4% of middle-aged men and 2% of women meeting the condition’s diagnostic criteria.

Age can also play a part in the prevalence of sleep apnea, with one study finding that OSA severity increased with age in females aged 45–53 years and in males aged ≤40 years.

A link between smoking and sleep apnea has been shown through various studies. One study found that while smoking may be a risk factor for OSA, the sleep condition may also be responsible for the nicotine addiction. This means that quitting smoking is recommended when receiving OSA treatment, but also that treating OSA may be necessary for quitting smoking in some patients.

Those who have trouble breathing through their nose due to congestion or issues such as deviated septum may experience OSA.

Sedatives, such as alcohol and certain medications can cause the tissue in the throat to relax, leading the airway to become blocked.

Those with close relatives who have sleep apnea may also be more likely to experience the condition.

Central sleep apnea (CSA) is most commonly caused by an underlying health issue such as a heart condition, stroke, or neurological disease. It’s most prevalent in males over the age of 65 and is also seen in those who use narcotics and live in high altitudes. CSA can also be a side effect of continuous positive airway pressure (CPAP) treatment.

As with all sleep disorders, there are certain health risks involved. Below are some of the most common sleep apnea risk factors.

Sleep deprivation and the symptoms that accompany it (including irritability, mood disturbances, and trouble concentrating) are common side effects of sleep apnea. Frequent awakenings mean sleep apnea sufferers spend most of the night in light sleep instead of the deep, restorative sleep that we need to function the next day. Inability to function during the day can lead to various risks, especially when driving or operating machinery.

Sleep apnea has been linked to a range of health problems, including cardiovascular issues. One of the reasons for this is due to the fact the body releases stress hormones each time breathing stops, which, over time, can lead to high blood pressure, heart attack, heart disease, and stroke. A Yale study found that sleep apnea can increase a person’s risk of having a heart attack or of dying by 30% over a period of four to five years. Another Yale study found that individuals with sleep apnea are at an increased risk of developing type 2 diabetes.

Because OSA has a number of causes, there are also a range of treatments available, from lifestyle changes to surgery.

The are various lifestyle factors that can help sufferers manage obstructive sleep apnea:

If lifestyle changes don’t relieve OSA symptoms, your healthcare professional may suggest trying breathing aids and, in some cases, surgery.

Oral devices designed to keep the airway open can be successful at treating OSA symptoms. There are a couple of different types of devices – some which bring the lower jaw forward and others that hold the tongue in a certain position.

Tongue retaining device (TRD)
TRDS are designed to hold the tongue near the front of the mouth and prevent it from falling to the back of the throat, which can cause OSA symptoms for many patients 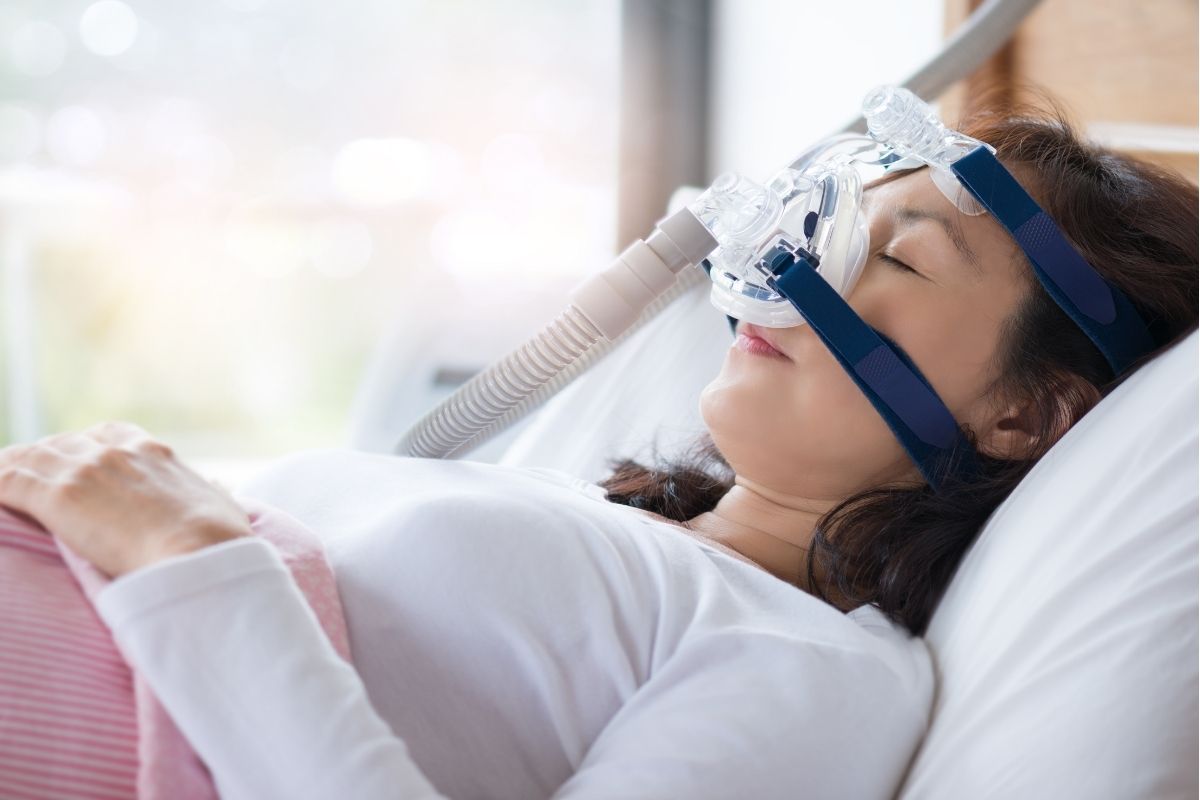 CPAP therapy is a treatment used for both OSA and CSA that involves patients wearing a mask connected to a machine that pumps continuous pressurized air into the airway during sleep. CPAP helps keep the airway open and therefore decreases the symptoms of sleep apnea.

Research has shown a significant improvement in the ESS (Epworth Sleepiness Scale) score of patients with moderate and severe OSA. However, some people also experience central sleep apnea due to CPAP treatment; this is known as treatment-emergent central sleep apnea.

In instances where other treatments don’t work, surgery may be performed. Depending on what’s causing the OSA symptoms, there are different types of surgery:

Uvulopalatopharyngoplasty (UPPP)
UPPP involves the removal of tissues in the back of the throat to open the upper airway. The tissues that may be removed/remodeled include the uvula, soft palate, tonsils, and adenoids

Maxillomandibular advancement (MMA)
MMA involves the repositioning of the upper and lower jawbones (jaw is moved forward) to open the airway and prevent obstruction. This treatment has been shown to eliminate obstructive sleep apnea for more than half of patients that undergo surgery

Tracheostomy
During a tracheostomy, an opening is created at the front of the neck, and a tube is inserted into the windpipe to help patients breathe

Because central sleep apnea is often caused by an existing medical issue, addressing the root cause can help treat the condition.

Certain medications can be used to stimulate breathing in CSA patients who don’t get on with positive airway pressure or whose sleep apnea is due to high altitudes. Additionally, if a patient currently takes opioid medications, these may be reduced to treat CSA.

Supplemental oxygen has been found to help some patients with CSA. In particular, studies have shown that ‘home oxygen therapy’ is beneficial to CSA patients with heart failure.

If other forms of positive airway pressure (CPAP and BPAP) haven’t worked, ASV may be prescribed. As with the previously mentioned PAP devices, ASV delivers pressurized air; however, unlike the other devices, it adjusts the amount of pressure during inhalation on a breath-by-breath basis. Some ASV devices also deliver a breath if patients haven’t taken one within a certain time window. ASV isn’t recommended for patients with heart failure. 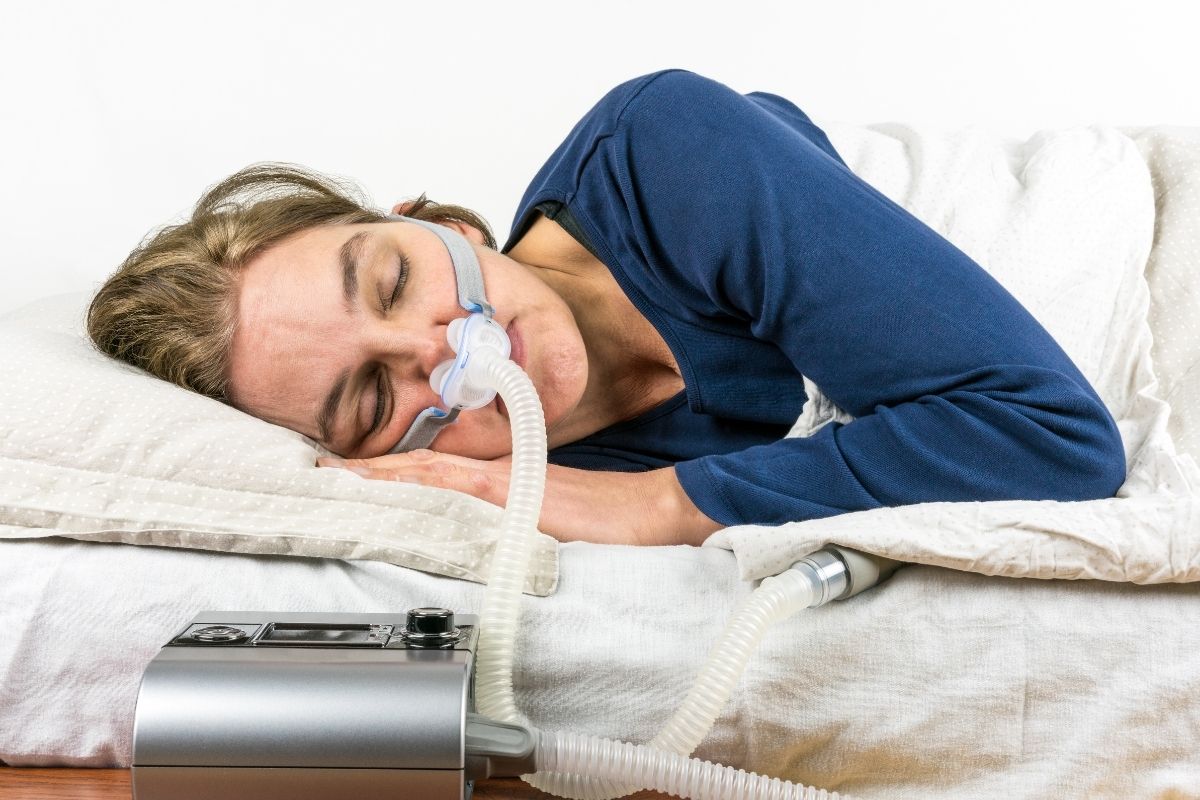 If you or a loved one regularly snores very loudly, wakes up gasping for breath, and experiences daytime sleepiness, it may be time to speak to your doctor.

To determine whether or not you have sleep apnea (and which type), your doctor may carry out some examinations, or they may refer you to a sleep specialist. Some of the examinations and tests to expect include:

As we’ve learned throughout this guide, sleep apnea can cause various health complications if left untreated. If you regularly experience any of the signs or symptoms highlighted, we’d recommend taking a sleep apnea self-test and speaking to your doctor.